Without knowing bio mechanics of our hip muscles , without knowing how our hip works we fitness trainers or gym goers can make mistakes. We might even consider hip muscle pain as good where something could be very wrong!

In this video we will go over the bio mechanics of the hips and how we can apply torque, labor to the hip to vary the resistance for you to understand how positioning can greatly change the muscles of the hip and how they were.

Let’s just say this band is 5 pounds of resistance so I can simply make my hip muscles work half as hard by placing the band half way up placing the band on the knees. I just basically reduced the resistance by half. Because the level arm just got decreased by half. I can decrease it even more by coming up to mid thigh.

So if we are to use simple math, we were 4 meters down, then 2 meters and now 1. I just cut the resistant by 75%. That’s how it works so another example of that if you are to do side plank. Either you can do plank on the side it works on your hip abductor muscle but if you bend your knees on the floor and plank you just reduced the lever by half for the hip muscles in that exercise.

This is to understand how distance is changing where to resistance is applied or changing the pivot point reduce the resistance significantly.

Now we will talk about some common exercises and how they affect hip muscles. 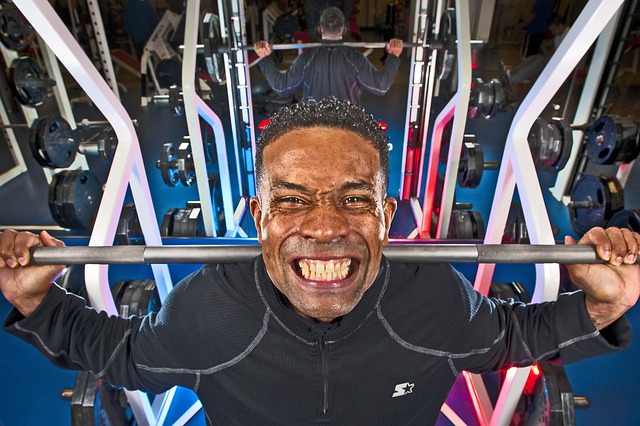 One of them will be the squat, so how you squat down can strongly change if it is emphasizing the hips or emphasizing the quad or knee. It is little bit hard to understand but from a side view..

When you do a squat there are 2 axis of rotations mainly, the hip joint and the knee joint, these are the 2 joints moving. Because in ultra-ideal word your spin should be moving. Technically if its moving it is another pivot point. Lets just assume that. If you look at my hip joint and knee joint, I will do squat and I will emphasize on shifting my body weight or sticking my butt out, make my body weight go forward.

If I have my chest this far forward you might be thinking where is the lever arm, where is the axis rotation? The axis rotation is the hip joint. For every milometer I bend forward my centre of gravity or in other words my entire weight of the torso plus if you have weight on your shoulder, your arms then the average place of centre of that resistance is probably going to be around here in my core.

When I lean forward the opposite is true, I now just changed the centre of mass going forward, now I have longer lever to my hip joint. But rather to knee I just moved the lever closer to the knee and that lever is smaller. So you see if you see any kind of squatting or lunging by having my weight up and down like this the hip muscles does not have to work this hard.

Because the centre of mass going pretty close to the hip joint, and when I forward like this now the hip muscle kick in. but by conversing by leaning forward my centre of mass closer to the knee so the lever is smaller. So the quad does not have to work as much. By coming back here my centre of mass much further from the knee, much longer lever the quad has to work harder.

So how your body is positioned dictates what muscles what muscles you are emphasizing. In an ideal world it’s a balance of both. So a technical squat, going down your chest is sort of over your knees, the centre of mass is possibly mid-way through your hip through the thigh. So there is a equal amount of contraction between the quads and hip or the hamstring complex.

And you want that ideal ratio, having your upper body too upright and going down you are emphasizing too much quad and not enough hamstring and hip muscles. Not only you have improper development, you also have admirable forces going through the knee essentially when the quads contract too much and the hamstrings do not.

Then your knee joint instead of just pivoting it also wants to slide inside the knee. Because the quadriceps is pulling it into it, in other words the femur wants to slide this way on top of the tibia. So sliding in the knee is like rubbing up cartilages in the knee with every reputation. With every repetition there is lot of weight, resistance being put through the knee. So if you keep grind the knee down with every repetition its going to accelerate joint break down.

Again that is not something you will feel that day, that month, year but years of improper body techniques will tear down the knee and they won’t know until its too late.

This is why we do not do a wall slide squat, when you have your feet here and you go down your centre of mass which is right here over your hip joint because you are leaning back. What that means is whenever you got resistance going through the pivot point there is no resistance essentially on that joint. So in other words by leaning against the wall my gluts and my hamstrings don’t really have to work.

I can just woggle my hamstrings right now they are not contracted at all. That is because the resistance is just going through the pivot point. Like standing right in the middle of the seesaw, no resistance. So the hip muscles do not work hardly at all, you core can actually not work as you are leaning against the wall.

And it is very admirable for your body to not have the hip and core work together with your thigh. One thing this doses is maximizing the lever of the knee because my resistance centre mass going through here, so this whole distance here is a lever arm for the knee. So my quads are working very hard.

The problem with this exercise is that when you have all quad and no hamstring, my knee joint really wants to slide. Infect as I am doing this there is friction of sliding in my knee joints. Again that promotes rapid ante arthritis. There is a lot of force on your quads, your body weight going down through the knee joint and with ever rep its sliding inside.

Its pushing on, its sliding the cartilage rubbing together with every repetition. And that is a pro knee arthritis exercise. And also you are not burning nearly as many calories as just staying a squat position like this. Because your gluts, hamstring, your back, your core everything is shut down. Not only you are burning probably 60-70% less calories, you are also accelerating the knee arthritis, you are also training your body to move in a very admirable, non-functional way of motor programming.

Your brain contract the muscle in way that doesn’t happen in life, so it is really important to understand the levers the bio techniques of the hips and how they applied to exercises. And how to train those movements those muscles to contract in a way that burns more calories. For most of your clients.

Backwards for athletes you just wana push them the most amount of weights with least amount of efforts that’s why you need to understand the bio mechanics of lever arms so you can control the resistance placement in relative to their goals. And lastly in wall squats I typically see, it is really important to understand that you want normal contraction balance of hamstring and quads.

Get that activation, the balance so the knee does not get rapidly de generated from abnormal forces.